Abide is an inner city, non-profit organization with a dream, that one day, Omaha, Nebraska would have no inner city. Their mission is to transform the inner city, one neighborhood at a time. Abide provides a holistic approach that focuses on developing healthy neighborhoods through four main areas: community building, family support programs, housing and partnerships.

As a partner of this organization, the Ludacka family recently donated, in full, three local properties located in disadvantaged neighborhoods, that will provide housing to four families in need of support.

Each year the Ludacka Team organizes an event called Christmas with a Mission, an event that engages community and includes shopping for gifts and delivering them to the mission, along with serving a meal to the homeless. The Paul Ludacka, Sr. Health and Fitness Center is named for Paul’s father and is the result of a major gift from the Ludacka family.

About The Navy Seals Foundation

This foundation is an exclusive assembly of 25 of the top community leaders in Nebraska who share a passion and love for the men and women who serve our Country. Together, the foundation has raised over $250,000 to support the mission of the Navy Seals.

Youth for Christ | Board of Directors

About Youth for Christ

Omaha Area Youth for Christ opened its doors twenty years later in January, 1964. Since that time, the Omaha chapter has grown into one of the largest ministry centers in the state of Nebraska. As part of the body of Christ, YFC's vision is to see every young person, in every people group, in every nation, have the opportunity to make an informed decision to be a follower of Jesus Christ and become part of a local church.

Paul serves on the board, but more importantly he is actively engaged as a partner in the work that YFC does for the youth across our city and throughout the nation. Paul speaks often at YFC events, encouraging young people and sharing the love of Christ and commitment to social involvement.

The Ludacka Team actively supports this grass-roots effort, formed to eradicate violence and crime by strengthening and supporting families.

This is an organization that the Ludacka’s support as an entire family. They place the video catalog up on the big screen, watch the videos, where they learn about a life of poverty, and the needs of the less fortunate, including the need for food, clean water, and education for women. Then, as a family, they make decisions on items and services they will purchase to provide support. In the past this has included farm animals, clothing, transportation, and housing.

For four consecutive years the Ludackas have sponsored the building and erecting of a water tower in a third world country. In December of 2015, Paul and his wife Sarah traveled to the nation of Cambodia on a two week trip, along with founder Mark Steele, to personally erect a water tower that they sponsored, in a small village badly in need of clean water. 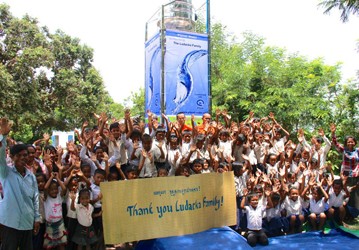